The Story Of The Regretful Charleston Chews Purchase

One day I was shopping at my local drug store. I don’t want to name the drug store, but I will say that the name is three letters and it’s a national chain.

Anyway, I see these beautiful candies sitting on the shelf and I reach down to grab a box, well, 2 boxes. They were on sale at something like 2 for $3, so hell yeah I was going to buy two. I try to pull the boxes, but there’s something holding them back a little. I yank them out and one of the sides of both boxes is crushed. I look down to see what happened and this is what I see: 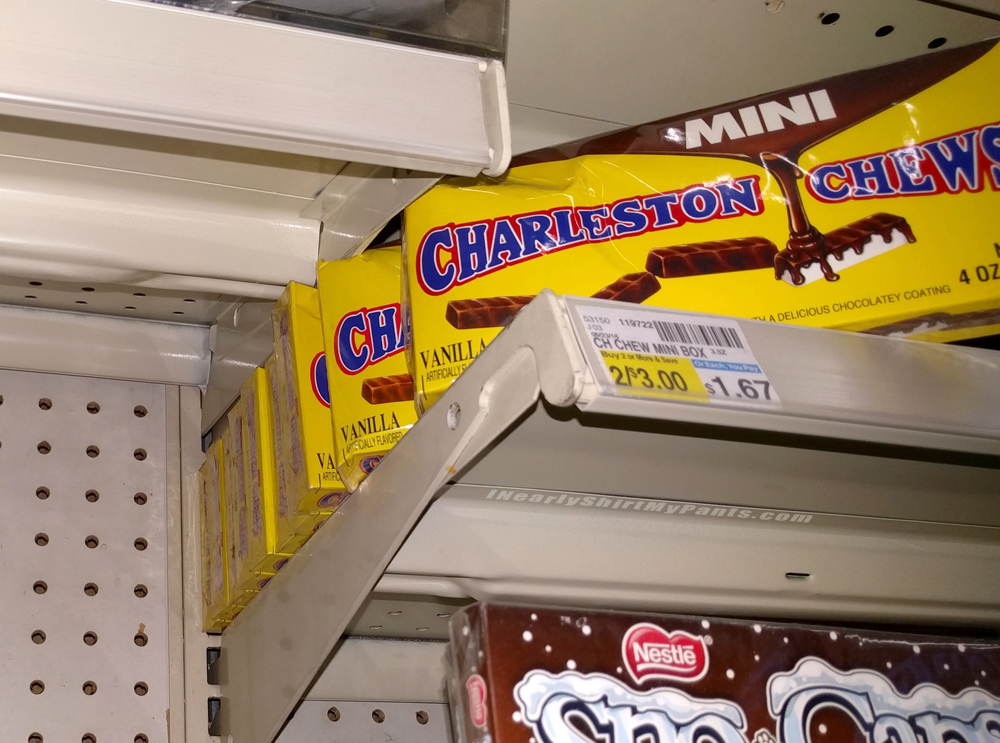 That should have been the hint I needed to toss them back and hope for a more respectfully treated box later on. However, I figured that it was only a lazy employee that didn’t want to restack the shelf so everything fits and simply jammed the boxes in there. They should be fine, it’s just the box that’s hurt… Yeah…

I get home and toss one of the boxes into the freezer and sit down at my computer with the other. I’m going to murder this box and I don’t even care. It’s mine to murder and that’s how it goes.

I open put on some mood music, I think it was a Sade mix. Kick my legs up on the desk, lean back in my chair, and smile as I open the box of one of the best candies to ever grace the earth. The cardboard moves to the side and I look into the box, they all look beautiful. Like a team of deliciousness ready to win gold at the taste Olympics. I pour some out into my hand, pop them in my mouth, and… crunch…

If you are unaware, the Charleston Chew is a chew candy. The name is the first hint. The fact that the large bars bend when you hold them from one end is another. Finally, the whole “chocolate covered nougat” item description is a really good tell. Needless to say, their should be no crunch in an unfrozen Charleston Chew. There should be no crunch at all. These crunched.

Because I’m an idiot, I ate more than a few more before deciding that something wasn’t right. I poured them out, nothing looked strange. I held one between my fingers and snapped it in half, that wasn’t right. I looked right at the box after that. I wanted to know how old these were.

The box has a code on it, no expiration date that I could really read as a consumer. I think there was a year on it, but that was all. I had to reach out to Tootsie Roll to find out how to read the code. They got back to me pretty quickly and were very helpful. The first thing they did was ask for the code on the box. I told them the code on my box. Even though it was clearly not their fault, the representative decided to send me a coupon for a free replacement.

I asked about how to read the code. She sent me a detailed description:

My Charleston Chews were made in 2011. 5 years before my purchase. 5 years. The three lettered national pharmacy that chose not to sell cigarettes after October 1st, 2014, had sold me a product so old that a kid born at the same time would be in school by the time I purchased it. They cleaned the entire store of tobacco products, but never swapped these out for anything fresher.

Now that I know what’s going on, I went ahead and sent the company an e-mail through their corporate site. This was another quick response. The quickest response I’ve ever received from them, actually. It was a direct phone call from the store manager. He told me they were doing a sweep of the entire store to clear out anything that might be old and he had no idea how they had sold me such an old product. I’ll be honest, he sounded just as confused about it as I was.

In the end, they offered me a $25 gift certificate as an apology. On top of Tootsie Roll jumping ahead of the curve and sending me a few coupons immediately, I felt like I came out pretty much on top. All I had to do was eat some nasty old candy without even knowing it was nasty and old, and there I was swimming in gift certificates and coupons.

Then again, it did kind of ruin Charleston Chews for me. I kind of wish they had just been good ones, then I could continue enjoying the great candy without having that bothersome thought in the back of my head.