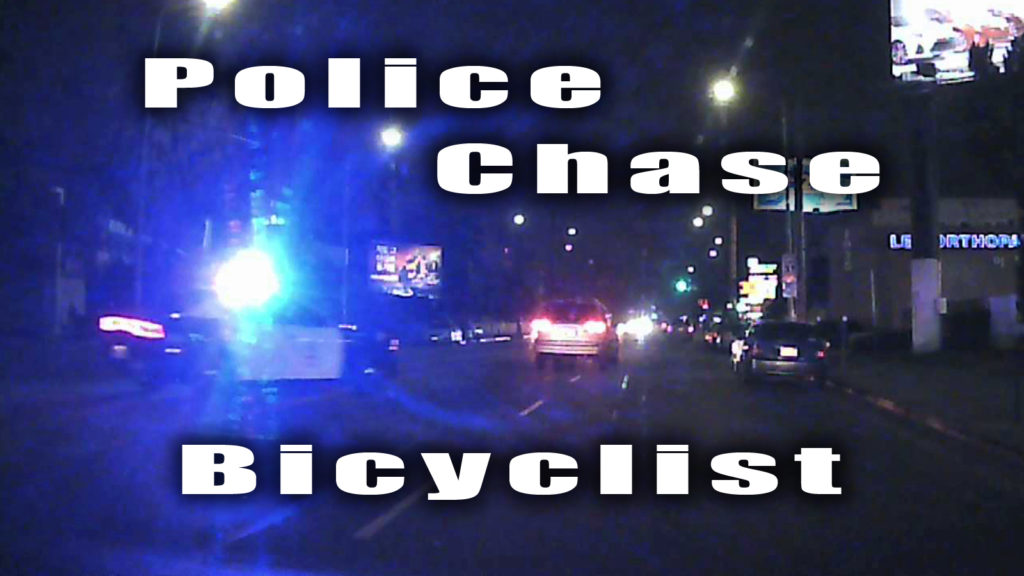 I was driving along down Vermont Avenue (in Los Angeles) one night when I saw a cop sitting in the intersection. Nothing special was going on, we were actually a block or two away from the station, so it was pretty normal. What wasn’t normal was that immediately after crossing the intersection the officer slammed on the brakes, turned on their lights, made a u-turn, and began chasing a bicyclist.

The cop swooped in behind the bicyclist and followed him into the gas station. The bicyclist then pulled a pretty sweet move to escape the cop. He rode into the corner, the cop followed in her car, and he u-turned right past her. The cop was stuck and the bicyclist rode off into traffic going the other direction. After a moment, the cop was able to get out of the gas station and continue her chase. The bicyclist was already across the street by then, but as we all know, cars are much faster than bikes. Once she was back on his tail the bicyclist stopped on the corner, put his bike down, and threw his hands up. There was nothing left for him to do other than give up and take a night (or more) in jail.

Although it wasn’t too big of a chase, it was a good injection of excitement into my otherwise boring night. I’m sure the cop didn’t mind having some excitement added to her night as well. The only person I’m confident in saying didn’t enjoy any part of this, was the bicyclist himself. Going to jail sucks, whether it’s for one night or more. It’s terrible. Especially in busy, overcrowded Los Angeles County jail. I doubt anyone wants to be there, ever.